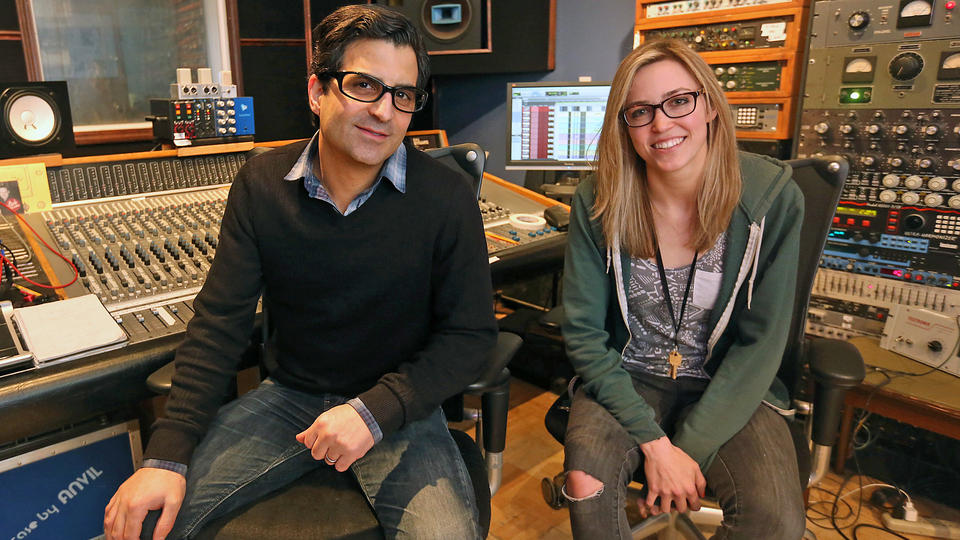 Photo By: John Wilcox
Article By: Jed Gottlieb
Track stars
HEAR AND NOW: Zippah Recording Studios owner/producer Brian Charles and engineer Annie Hoffman are booked solid for the next month and a half.

Audio software Pro Tools and GarageBand revolutionized home recording, making it easier and cheaper to work in your basement, bedroom or tour bus. Professional recording studios felt the pinch, and many closed in recent years.
But in Boston, business is booming for producers and engineers.
Brian Charles’ Zippah Studios is booked solid through mid-April. A group of producers and engineers, including Jerry MacDonald, Dan Gonzales and Jeremy Mendicino, recently banded to open Odd Fellows Recording in Weymouth. Converse’s new Boston headquarters will include a Rubber Tracks recording studio set to open next year and earmarked for free, daylong sessions for up-and-coming acts.
In the grandest statement that pro studios remain integral to making records, Berklee College of Music is putting the finishing touches on a 22,000-square-foot, 10-studio complex in the school’s new Massachusetts Avenue high-rise.
“The work flow in the industry has changed, and market pressures and real estate prices forced studios in New York and Los Angeles to close,” Berklee music production and engineering chairman Rob Jaczko said. “But anyone talking about the death of the recording studio is using a lot of hyperbole.”
Steely Dan guitarist Jeff Baxter once joked it would take him weeks just to pick out a comfortable chair when record companies were paying him $300 an hour. Those days are long over. Labels rarely shell out big money for albums now, but some recordings demand the kind of space Berklee built.
“Studio one is our biggest and is our scoring stage. It can accommodate an orchestra,” Jaczko said. “A guy rapping over beats can record at home, but nobody can make a Broadway musical cast recording in their bedroom.”
Berklee’s new facility could handle the Beatles, Pink Floyd or John Williams tracking “Star Wars.” But smaller studios also remain indispensable.
“Part of what matters is equipment, but the main difference is working with a producer,” engineer Annie Hoffman said. “A good producer knows what a song needs and how to get that sound.”
Hoffman sees the art from both sides — she plays bass in local luminaries the Field Effect and works with Brian Charles at Zippah. She echoes the thoughts of her peers: Studios matter, producers matter more.
When asked about their favorite studios, local artists heaped praise on a range of facilities — Mad Oak, New Alliance, Dimension Sound and, most often, the legendary Q Division. More often, musicians name-checked local producers.
“You’ll never get around how much outside (guidance) can help you,” said Life Electric frontman Joe Chehade, who tracked vocals at Zippah this week. “Working with Brian has been amazing. He hears something in your performance and draws it out. He makes you do more work, but it always makes the song better.”
Seems the future is secure for the world’s “Abbey Road”s, and its George Martins, too.