What’s F’n Next? – The Field Effect 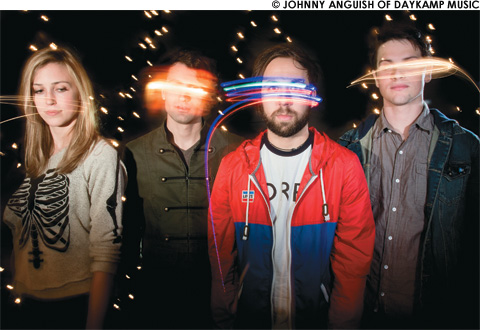 By now it’s cliché to write about music having a “driving”force, or describing it taking you to a certain place where mundane daily occurrences could not. But there’s something about the Field Effect that just feels like movement. Impassioned guitar-rock that’s more sophisticated than the power-chord party-bro sounds coming out of the far corners of North America, it’s mature without being grounded, excitable without overextending itself. It’s just smart, driven rock and roll that creeps under your face and lets you see the world from their musical cockpit.

“I can see the Field Effect leading a new generation of classic Boston rock,” says Jim Gilbert of the Sheila Divine. “They are an old-fashioned four-piece putting everything they have into making an impression on the audience.”

The first true Boston band to be put in regular rotation on the re-launched WFNX.com (apologies to the since-relocated Passion Pit), the Field Effect’s debut full-length, Cartography, is indeed a relentless rock crusade. Led by the skinny-riffed single “Ogunquit, ME” (choice lyric: “I fell for you like rain”), the record is putting an exclamation point on the band’s first two years together after meeting at Berklee. If the band is going places, Cartography could be the (literal) roadmap.

“It’s the art of making maps,” says frontman/guitarist Doug Orey, defining the album’s moniker. “For some reason, my last couple of relationships have been long distance, some longer distance than others, some more serious than others. We discussed the themes in the lyrics, and the things that kept coming up were maps, distance, and locations.”

But as Gilbert suggests, the Field Effect’s home is the stage, where they rarely stay still. “We get very wrapped up in it, we get very involved,” says Orey. Adds bassist Annie Hoffman: “A band’s live show has to make you love the record even more.”